with the electrifying one-man blues-rock-roots of

A Mexico City rocker by way of San Diego, Christopher Leyva will host a night of rock and roll in Dave’s Garage at Brick by Brick Saturday night May 25.

“I’m honored to have Leyva on board,” says Dave Good. “He’s always been an interesting player in the music world, from his involvement with the Grammys to his last gig as a talent buyer/concert promoter. He’s an exciting performer himself, and he brings an uncommon element of class.”

Dave’s Garage at Brick by Brick is a monthly concert series designed to showcase SD Reader music journalist Dave Good’s favorite local and so-cal area bands. “We’re gonna really mix things up in the coming months and combine a lot of different acts on the same stage — blues-rock, soul, Americana, garage, hard rock, alt-country, and indie. It all connects at the music level, because it’s all rock and roll, right?”

Saturday 8/24: the Brett Ellis Band with Joey Harris and the Mentals, Raymond DiGiorgio, and the Deep Joint

Dave’s Garage is made possible through the support of our friends at Red Bull, Guitar and Bass Land/Skin City Drums, and Rock and Roll San Diego 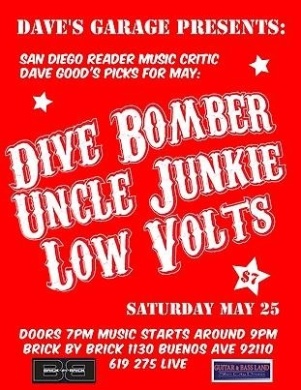